When the author of the book is Stefan Zweig, there is always suicide in a part of the book; Published for the first time in 1922, the work, written in the form of a long story and letter, consists of a letter from a famous author from a woman he does not remember. In the letter, Stefan Zweig, who conveyed the one-sided love of the woman in depth, ended the book with the suicide of the woman, the author of the letter.

Letter from an Unknown Woman

Stefan Zweig wrote his long story Letter from an Unknown Woman (Brief einer Unbekannten) in the first half of the 1920s. We only know the heroine of Letter from an Unknown Woman as the author of a long letter. The “sender” of this letter, which the woman wrote for the man she loved all her life, has no name. At the beginning of the letter there is only one address: “To you, who never knew me”. The woman is always willing to live her great passion as an “unknown”, that is, alone, there is only one “side” in this love story, not “parties”. Can this be called true love? Zweig invites his readers, once again, to an unprecedented journey in human psychology. It is also possible that at the end of this new journey, he aimed to reach the hitherto unknown shores of the concept of “absolute love”!

The woman never says that she has been in love with him for years during their short time together. She fears that if she does, she may place responsibility on the man for an unshared deep feeling. For the same reason, she hides that she already has a child with him. Because, according to the woman, the love she experiences can only be a “mutual love” if it can be understood by the man in front of her in this dimension. If this does not happen, the woman is always willing to live her great passion as an “unknown”, that is, alone. – Ahmet Cemal

But why am I telling all this? An abandoned child’s insane, self-devouring obsession with such tragic despair? Why am I telling this to someone who never sensed, never knew? But was I really still a child back then? I was seventeen or eighteen-young people were starting to turn and stare at me in the streets, but by doing so they only angered me. Because falling in love thinking about someone other than you, or even just playing a game with love, was so inexplicably, so unimaginably foreign to me, and even contemplating these things would have been murder for me. My passion for you has always remained the same, only the room has become different with my body, it has become more raging, more bodily and feminine with my newly awakened emotions. And what the child once could not sense with the fuzzy and untrained will of the child who knocked your door, now became a single thought for me: to present myself to you, to be yours. – Letter from an Unknown Woman

But how could I tell you?  You would never have believed that a foreign woman like me, an overzealous volunteer for three nights, a woman who opened herself up to you without any opposition, moreover with passion, that anonymous woman of a fleeting welcome was faithful to you, to a man like you who was unfaithful – without the slightest suspicion of this child. you wouldn’t have known as your child! – Letter from an Unknown Woman

… I stood up, looked at you, for a long time and without taking my eyes off you. Then I said: “The man I fell in love with always went on a journey too.” I looked at you, looking directly into your eyeballs. “Now that now he will know me!” he began to tremble and shake everything inside me. But you smiled at me and said consolingly: “But travels come back.” “Yes,” I replied, “it will be returned, but then it has already been forgotten.” – Letter from an Unknown Woman

This love adventure of our heroine, which started when she was a thirteen-year-old little girl, obsessively follows the famous writer, and somehow manages to be noticed when she turns eighteen, spends a few nights with the writer and goes out of town, promising to write a letter when she returns. He doesn’t come back and one of these nights the woman is pregnant and he doesn’t share it with the writer, the writer he met again and again never knew him but that night, the night in the dance club, the woman who caught the writer’s attention received an offer from the writer, this offer was because he thought she was a prostitute, because of the love of the woman. accepts, hints with a few words to remind himself, but the author does not recognize. Our heroine does not want to reveal this one-sided love because of the love she does not see from the other side, and this secret remains until the letter is written, she sends the letter she wrote after the death of her child, anonymously, to the man she loves, and commits suicide.

This love story, which lasted from his childhood until his death, comes to light with a letter. This book, written in the form of a short story and letter that you can finish in one sitting and has a pleasant and fluent language like other Stefan Zweig books, should definitely take its place in your library. 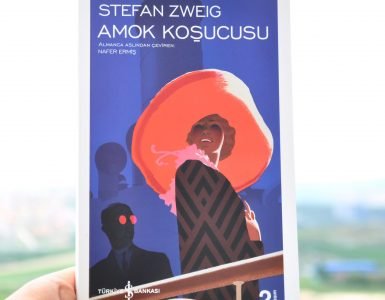 Amok runner; It’s the term that I thought was the story of a runner special to the reader, and that I discovered it was a disease when I read it.  The Amok Runner is the story of a man who, as a doctor, is...